It’s true IoT is a real game-changer. The technology doesn’t only affect the consumers but also the providers of IoT solutions. The Internet of Things brings changes to software development on many levels, including the web. Complex IoT networks set new challenges for web developers in terms of both back and front ends. How do IoT systems differ exactly from good-old web development in the not-interconnected world?

Let’s dig through the main peculiarities of IoT projects and find out the ways they affect web development. Read further to find out how IoT is reshaping web development and design.

The place for web development in IoT

If you’re wondering why we bother talking about IoT and web development in the first place, give us a chance to explain. The network of connected devices relies on web servers. The data obtained from sensors is stored in the cloud and advanced messaging protocols are responsible for communication between devices. And it’s the user interface that helps users interact with connected devices.

On top of that, many IoT devices can display website content. These include TVs, laptops, wearables and smart appliances. Some of them can search the web through browsers. Take Amazon’s Echo with its virtual assistant Alexa, for instance. As you can see, web development and design are actually important parts of IoT projects.

IoT networks are usually a lot more complex than a regular web application. They have to deal with vast amounts of data, intense communications, dynamic user interfaces, security and reliability issues. Let’s have a closer look at the peculiarities of IoT systems.

Basically, IoT systems work with huge amounts of data. They collect real-time data from sensors, process it and transmit it to and from the cloud. Chances are, these amounts of data can cause delays in the network. Also, losing any bit of data is unacceptable. That’s why compared to ordinary web development, IoT focuses more on the system’s scalability and reliability.

Scalability ensures data collection and distribution doesn’t depend on the data volume. Reliability means data collection and distribution happen without interruption. This is why IoT developers choose the languages and solutions allowing applications to scale as C, C++ and JavaScript. Moreover, in IoT development, it’s important to transmit loads of data via appropriate advanced protocols for data interchange. Protocols used are XMPP for real-time communication and AMQP for message-oriented data receiving/sending.

The RTInsights’ survey shows 51% of software developers state the importance of IoT solutions is being reliable and scalable. According to them, this is the main difference between developing IoT applications and conventional application development. 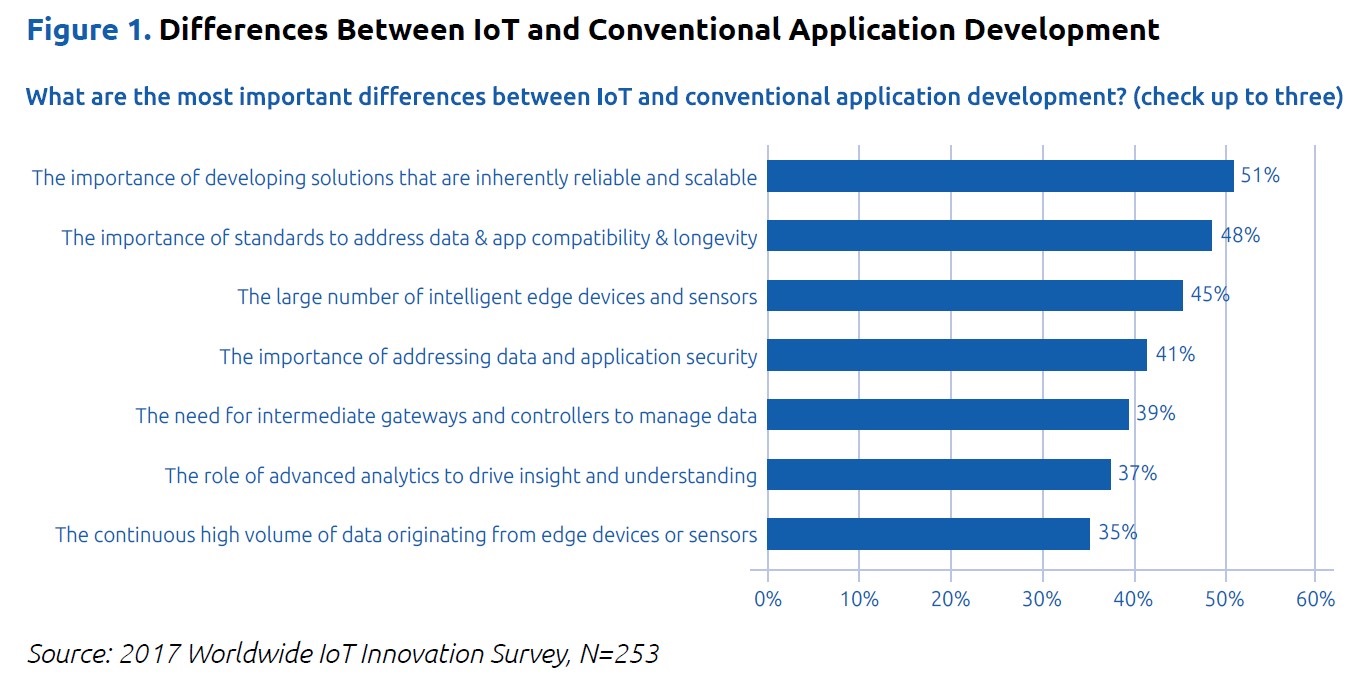 In addition, communications in IoT networks usually consume a lot of energy. That’s why they need to be designed with minimization of power use in mind. Advanced messaging protocols and high-bandwidth interconnects can help make pages load faster.

UI helps users interact with the IoT system. It displays valuable insights from collected data and helps manage the entire network. Since an IoT system collects massive amounts of different data, it has to display lots of analytics and infographics. Complex user dashboards are a common design solution for this.

The control of an IoT network calls for dynamic user interface solutions. They suit complex IoT applications perfectly since they allow generating portlets or pages dynamically, which is especially helpful when dealing with multitasking.

While security has always been an important concern for conventional web development, it is far more crucial in IoT. According to McKinsey, security is the major challenge of IoT growth. It’s clear smart devices should be secured from outside intervention to keep the network and data safe. Clearly, that is a job for web development.

The Open Web Application Security Project (OWASP) has named web interface the number one weakness of an IoT system. Insufficient authentication/authorization comes second in the project’s top 10. The main IoT system’s vulnerabilities actually lie in the web development and design domain, not the hardware. That’s why IoT web design has to focus on the system’s security. To ensure access security, IoT developers usually create advanced user authentication and user access management. You have to make sure data and communications within the network are secured through encryption.

Although the future of IoT is multilingual, there are certain languages that are leaders in IoT solution development. According to the IoT developer 2018 survey, Java, C and JavaScript are the top 3 languages for building IoT solutions. If Java and C are commonly used for programming devices and gateways, JavaScript is the one oriented towards web development. And since JavaScript dominates the web (95% of all websites are built on JavaScript), it’s going to hold a special place in IoT development for a long time. JavaScript frameworks are also popular in IoT. Apart from Node.js, IoT developers use Johnny-five.io, Zetta.js, Cylon.js and Nodered.

IoT applications have their peculiarities, and they influence web development. Because an IoT system is data-enhanced, web developers have to ensure its reliability and scalability. IoT demands dynamic user interface solutions, and don’t forget its weak spot is the web interface. So, make sure to secure it with authentication and encryption.

This article was oroginally posted on IoT For All.

#IoT #Internet_of_Things #Web_Development
Rate this blog post:
0
Want to talk to a real person?
You checked out our company blog! We’re impressed! Want to move forward? Discuss your project with somebody real, like Yurii, who is a go-to person for your project.

Yurii
Business Development Partner
Want to talk to a real person?
You checked out our company blog! We’re impressed! Want to move forward? Discuss your project with somebody real, like Yurii, who is a go-to person for your project.
1 Comments
Log in with
undefined 09.10.2020

A great piece that sheds much needed light on IoT application development company and its impact on business as there are many new details you posted here. Sometimes it is not so easy to build a "IoT application development company" without custom knowledge; here you need proper development skills and experience. However, the details you mention here would be very much helpful for the beginner. Here is yet another top-notch solution provider “X-Byte Enterprise Solutions” who render feasible and credible solutions to global clients. Know more here: https://www.xbytesolutions.com/iot-app-development-company.php